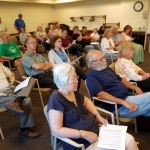 Some citizens and local political leaders are voicing concern about small amounts of run-off from coal ash pits leaching into the National Scenic Middle Fork River northwest of Danville.  State Representative Chad Hays told about 75 citizens attending a forum at Danville Area Community College last night that he talked earlier in the day with the Illinois Environmental Protection Agency about it.  ‘’They have set into motion a series of tests and requirements of Dynegy over the next several months – actually the next year – for them to model, both with samples and with cost estimates a number of different scenarios.  They range from what the company would prefer to the full elimination or taking out of the coal ash.’’  [Representative Hays is shown addressing the crowd in the photo below.] 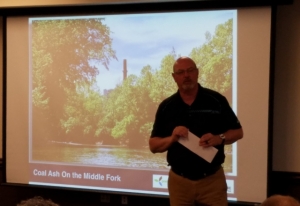 Danville Mayor Scott Eisenhauer also attended the meeting hosted by the group Eco-Justice Collaborative, and told the crowd.  ‘’I have said publically and will continue to say that I believe it is our best interest for the movement of the material to a far safer environment than what exists today,’’ said Mayor Eisenhauer.  And the Mayor added he believes ‘’if you simply cap it, then what you’re really talking about is the delay of the opportunity for something to happen, not the elimination of something to happen.’’

Dynegy says it completed a riverbank restoration project along the Middle Fork River last fall.  But citizens who attended the meeting were shown newly shot video showing discoloration along the bank and areas where some chemicals have settled into small ponds along the riverbank.

The Middle Fork of the Vermilion River is Illinois’ only National Scenic River.