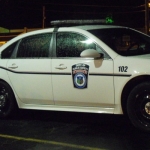 Danville Police are seeking help from the public as they probe a fatal weekend shooting.  Public Safety Director Larry Thomason says officers were called to the 900 block of Campbell Lane shortly before 3 o’clock Saturday morning on a report that a person had been shot.

‘’Officers arriving at the scene found a 25-year-old male on the ground and immediately called for medical assistance,’’ said Thomason.

‘’The man was taken to a Champaign area hospital by Arrow Ambulance where he reportedly died during surgery,’’ added Thomason.

The victim’s name has not been released yet by the Champaign County Coroner’s Office.

Danville Police are asking anyone who has information that might help in the investigation into the shooting to give them a call at 431-2250.  You can also leave information anonymously – if you would like –by calling Vermilion County Crime Stoppers at 446-TIPS (446-8477).