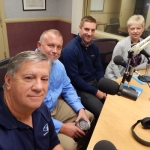 Representatives from some Danville industries say they are eager to allow the public to tour their facilities this week.  On Saturday, October 21st, there will be eight local companies opening their doors for tours.  Fiberteq, LLC., is one of them and Plant Leader Jon Stalcup explains what the company manufactures…

Hall of Fame Plaques and Signs by Trigard is another company the public will have the opportunity to tour on Saturday.  Sales consultant John High says – like other industries – Trigard uses hi-tech processes…

In addition to those two plants other local industries participating in Saturday’s Tour of Industries between 9:00 a.m. and 3:00 p.m. include:

The Tour of Industries is sponsored by Vermilion Advantage in cooperation with the local participating industries.  Those participating in the tours will be able to get information about job opportunities.  Haugen says the number of manufacturing job openings nationwide is stunning..

[Haugen and the others discussed the upcoming tours on WDAN Radio’s Newsmakers program.  You can listen to the entire program by going to the pod section of our homepage at VermilionCountyFirst.com.

***[Those in photo include Larry Moss, President of Automation International (on left), Jon Stalcup, Plant Leader at Fiberteq, LLC., John High, Sales Consultant for Hall of Fame Plaques & Signs by Trigard, and Vicki Haugen, President and CEO of Vermilion Advantage.]