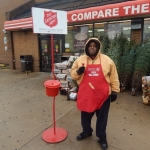 The Danville Salvation Army is getting ready to launch its Red Kettle campaign.  And the sign-up is underway for groups and individuals interested in manning the kettles.

The Salvation Army’s 1st Annual Christmas Red Kettle Kick-off Dinner and Fundraiser is set for Tuesday, November 7th.  It will be held at the Dove Banquet Center on Woodbury Hill Road in rural Danville.  Tickets for the dinner are $25 each in advance.

The catered dinner will offer a choice of baked chicken or pulled pork.  You can drop off, or mail your RSVP to The Salvation Army at 855 East Fairchild Street – Danville, Illinois 61832.  Donations can be sent to that same address if you are unable to attend the banquet.  Money that is raised goes to provide food, shelter and other disaster relief for area individuals and families in times of emergencies.

Salvation Army bell ringers raise – on average – $30 per hour.  In two hours of manning a kettle the Salvation Army says you can raise enough money to provide a week’s worth of groceries for a family of four.

The Bismarck-Henning Rossville-Alvin Co-Op Band will provide entertainment for the banquet.

[The photo is of a Danville Salvation Army bell-ringer from last year’s campaign.]