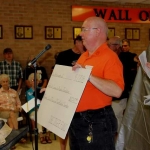 What started as an idea at a class reunion could become a way to fund scholarships for Westville High School students for years to come.  The foyer area at the high school was packed with Tigers Sunday, since they say ‘once you’re a Westville Tiger you are always a Tiger’. 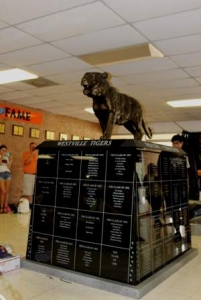 It was the Class of 1972 that came up with the idea to place a statue of a tiger inside the school.  It was originally intended to honor those classmates who had been lost over the years according to Keith Kittell, who helped spearhead the project along with a small committee.  He says the new tiger was made possible with the help of 76 classes and 34 businesses and families.

The tiger stands on a pedestal which has messages from various classes, businesses and families who donated to make it possible.  During Sunday’s dedication Kittell said enough funds were raised in just a couple of months to fund the tiger and have enough left to fund $3,000 in scholarships for nine years.  He suggested that if classes would pass the hat during their reunions perhaps the scholarships could be offered perpetually.

The handful of people who helped raise the tarp off the tiger on Sunday included representatives ranging from the Westville High School Class of 1940 to the Class of 2030.   Westville also has another tiger at the entrance to its football field.

[In the photo J.D. Lagodski of the Westville Community Education Foundation addresses the crowd during the dedication. He is a retired Westville teacher who has come out of retirement to teach some this year.]

← Body Recovered Believed to be Carle Doctor
Unions, Politicians Out in Force for Parades →