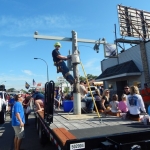 Unions and politicians were out in force Monday for the annual Labor Day parades in Danville and Westville.  Mike Arbuckle, Business Manager of IBEW Local 538, was asked how things are going with his union…. 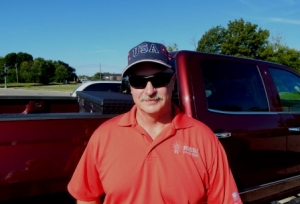 But Arbuckle added he is glad to see the jobs coming back.  He says there ‘’is a crazy amount of work now taking place across the country.’’  And Arbuckle also offered some advice for high school students who may want to join the IBEW later….

Union employees from Danville’s Pepsico plant were also in the parades.  Delores Cushman is president of local 347G of the Bakery, Confectionary, Tobacco Workers and Grain Millers and was asked how things are going with her union…

There are about 450 workers represented by the union. Cushman outlined what they make at the Danville Plant….

Candidates were out in force because Labor Day traditionally starts the final push toward the November General Election. 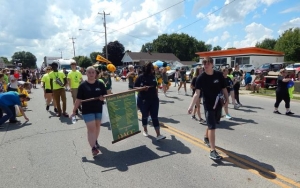 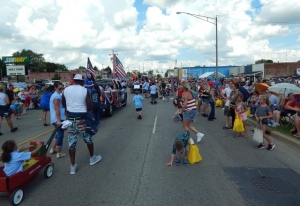 [Photo on left shows part of the group representing Danville Area Community College in the parade.  The photo on right gives some indication of the size of the crowd along Westville’s parade route.  You can click on the photos to enlarge them.] 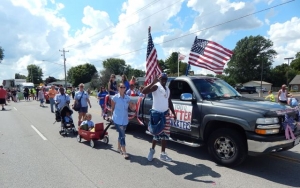 [Local Letter Carriers were among those who participated in the parade.  See more photos at VermilionCountyFirst.com.]  The top photo features 12-year-old Brennan Burnett of Westville hanging on the side of an Ameren power pole. You can click on the photos to enlarge them.] 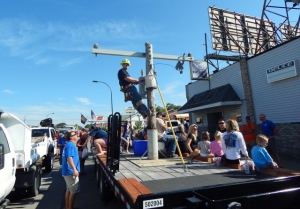