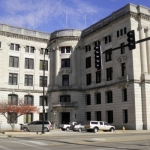 Lucy Overlander is the Victims Rights Coordinator in the State’s Attorney’s Office….

Lacy says there were only two crime victims advocates working in her office when she became State’s Attorney.  But with the help of state grant money she was able to add two more.  The advocates can often be seen in the courtroom explaining to the victims or their family what is happening.   Lacy sees the advocates as a bridge between victims and their attorney.

Lacy also noted that on July 19th a golf outing is scheduled to raise money to support the advocates.