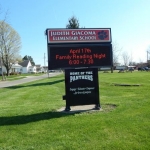 Westville Police have taken a man into custody in connection with some alleged threatening remarks which caused a school to be placed on lock-down.  Westville School Superintendent Seth Miller says just before noon, the District was made aware of ‘’an inappropriate and threatening remark made to a school administrator.’’

The individual who made the remark left Judith Giacoma Elementary School without incident.  Superintendent Miller says that ‘’out of an abundance of caution,’’ the District notified law enforcement ‘’who responded immediately and ensured the building was safe and secure.”  And Miller added… 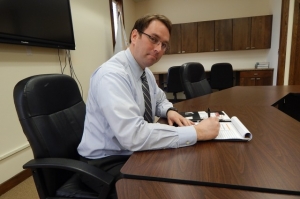 The Westville Superintendent (shown here) added there will continue to be a police presence at the school….

Miller said it is reassuring knowing that the first responders know how to handle such a situation.

The man who allegedly made the remarks was arrested at his home by Westville Police, with assistance from Vermilion County Sheriff’s Police.  And Miller noted the suspect is presumed innocent unless proven otherwise.

Although classes continued after the lockdown was lifted, some parents were allowed to pick up kids if they wanted to leave early.