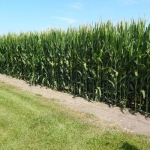 July is half over but area crops are far from where they normally are at this time.  A very wet spring delayed planting, and Tom Fricke – a spokesman for the Vermilion County Farm Bureau, says it has crops lagging behind….

‘’As we all know it was a rough spring getting everything in.  I’m not sure everything did get in,’’ said Fricke. ‘’A lot of the fields did get planted, but I’m sure there are some prevent planted acres. There are some fields where they did get planted, and then they had ponds develop in later rains that maybe aren’t going to get re-planted. So it’s going to be a spotty year.’’ 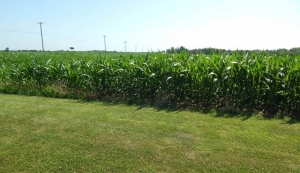 [This corn is growing near Oakwood. You can click on the photos to enlarge them.]

‘’If they had Federal Crop Insurance and you have been prevented from being able to plant your crop, you will receive 55-percent of your coverage – which depending on what level of coverage you buy is anywhere from 70 to 85-percent.  So you’re not getting a full income. You’re hoping to just cover maybe some of your costs in trying to get a crop in the ground.  Because you’ve probably already purchased your seed, you’ve already put on some fertilizer, you’ve already purchased chemicals, and, of course you’ve already paid rent,’’ said Fricke. ‘’So you’re just trying to recover some of those costs to get to next year.’’

And Fricke adds the late start will definitely impact this year’s harvest…. 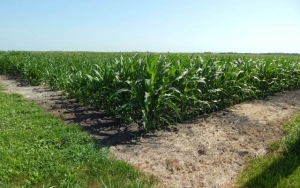 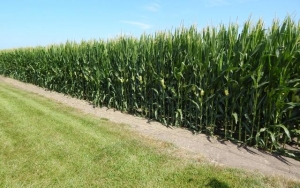 [This photo also shows corn near Catlin on July 15, 2019.  The advancement in the crop depends on where the rains hit and how soon farmers were able to plant this year’s crop.]

‘’There’ll be an impact on yields. We’re not going to have bin-buster yields like we’ve had the last four or five years. So, it’s going to have an impact that way as well,’’ said Fricke during an interview with VermilionCountyFirst.com News.  ‘’Hopefully once USDA reports get evened out to where it’s reflective of the actual acres planted the prices will then take off because agricultural commodities are still a strict supply and demand ratio. And that’s what impacts the markets. And so we’re hoping there’s a little bit of an off-set there for the acres that did get planted,’’ added Fricke.

In addition to their concerns over the weather, area farmers have also been worried about trade talks and tariffs….

‘’Trade is one of our number one key factors in the local agricultural economy.  Illinois agriculture depends on trade to China and other countries as well.  And we want to make sure that we keep those markets available to all of agriculture and all of the U.S.,’’ said Fricke.

‘’There were definitely areas of trade that needed to be leveled out and fixed.  Unfortunately agriculture has just taken the brunt of those tariffs that have been put in place to this point.’’

This story written by Bill Pickett, News Director of Neuhoff Media Danville.  Got a news tip?  Contact Bill at (217) 709-1245 or at BillPickett@Neuhoffmedia.com.