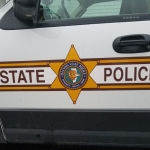 >>> THIS STORY HAS BEEN UPDATED.  SEE OUR UPDATED STORY AT VermilionCountyFirst.com. <<<

Vermilion County Coroner Jane McFadden says one person has died from injuries received in an accident on Interstate 74 near Oakwood this (Thursday) afternoon (August 1, 2019).  She says the victim was the male driver of a semi tractor trailer involved in the crash.

The name of the victim is being withheld pending identification and notification of family members, according to Coroner McFadden.

The crash occurred along the westbound lanes of Interstate 74 near the Oakwood exit.

Illinois State Police say two semis were involved in the crash and fire erupted following the collision.  Oakwood Fire and Ambulance units responded to the call shortly after 3:00 p.m. along with some other emergency personnel.

State Police say there was also a secondary crash in that same area.  The accidents closed the interstate in that area, but as of 6:00 p.m. State Police said the eastbound lanes of I-74 were back open.  The westbound lanes were still closed in the area of the crash and were expected to remain closed for another 2 to 4 hours.

The eastbound off ramp at Oakwood was also closed due to traffic congestion, but was expected to re-open when the westbound lanes are back open along the interstate.

Other details were not immediately released.