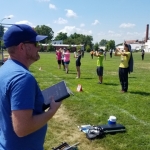 {‘’Band of Vikings is moving into the 21st Century. We’re using an electronic phone app to learn all of our drill. And it’s really kind of neat because the kids get a completely different perspective as to what we normally do,’’ said Krapf. ‘’Normally we use paper and they have to figure out their coordinates, but everything they need is on their app.’’}

Students were marching around their practice field at Danville High School Thursday looking at their phones as they tried to learn their show.  Krapf says it makes things interesting… 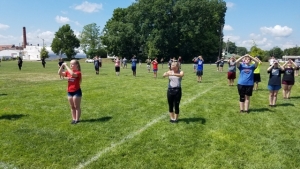 {The really cool thing about it it’s got animation that shows the kids what the forms look like when they move.  It’s got the exact measurements of where they are on the field.  It gives them different perspectives, and they can also see who’s next to them and around them.  So they can see where they’re going,’’ said Krapf.

Krapf admits it is a learning experience for him, too.  He describes this year’s show…. 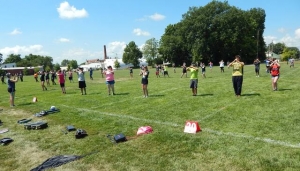 {‘’We’re doing an alien abduction type show. Actually it’s loosely based on the ‘Star Trek’ concept of the Borg.  Our color guard – their costume is very alien, and at one point in the show the color guard is going to simulate the band members and we’re going to change out the costume as the show progresses.  So they’re going to start out in their traditional uniforms, and then half-way through the show they’re going to become ‘Cyborgs.’’’}

You can see the Band of Vikings perform at their first football game on September 6th.