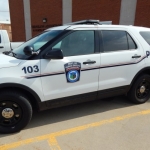 Danville Police are investigating two separate shooting incidents in which three people were shot late Thursday night, (August 15, 2019).   Police Sergeant Eric Olson says officers who were in the area of the 1100 block of Chandler Street heard multiple shots fired shortly after 11:30 p.m.   It was shortly thereafter that police found a 27-year-old Danville woman at Fairchild and Grant Streets suffering from a gunshot wound to her back.

Police say the woman told them she had been shot at a party in the 1100 block of Chandler and was trying to run to the hospital.  The woman was transferred to Carle Hospital in Urbana with a bullet lodged close to a lung.  She was listed in stable condition as of 6:00 a.m. Friday.

A 31-year-old Danville man also was transferred to Carle hospital from OSF Medical Center in Danville after he suffered a gunshot wound to his right thigh.  The man said he was also shot at the Chandler street party.

And Danville Police were called to the 200 block of Delaware shortly before midnight Thursday on a report a subject was being held by two subjects at gunpoint who were wearing masks.   Police arrived and discovered a 23-year-old Danville man had suffered a gunshot wound to his shoulder.  He also suffered a deep cut to the side of his head and was transported to Carle Hospital in Urbana.

The victim told police he was attacked by two males wearing masks and was struck by an unknown type of firearm around the front porch of a home in the 200 block of Delaware.

As they continue their investigation into the shootings police say they do not know whether they are related.  Anyone who has information that might help solve these crimes is asked to call Danville Police at (217) 431-2250…or Vermilion County Crime Stoppers at (217) 446-TIPS.