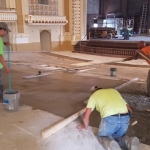 If you have not purchased your tickets yet for The Lettermen concert at Danville’s Fischer Theater next month…you’re too late.  The show for the opening night of the newly-renovated theater is a sell-out. In fact, the tickets were all sold in just twelve days.

(Note: You can click on the photos to enlarge them.) 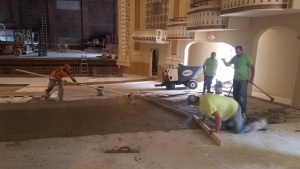 Although the Grand Opening Concert and Fundraiser is only about a month away on September 21st there is still lots of work to complete on the building.  Friday morning a crew was busy pouring concrete for part of the theater’s first floor seating area.  Elsewhere in the building, though, new seats are already in place.

The Vermilion Heritage Foundation, which has been spearheading the efforts to restore the historical theater, is excited about the upcoming concert.   And the group says The Lettermen are also excited about being the opening night act.