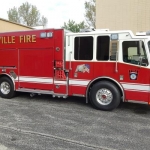 The Quality Inn Motel located along Lynch Road on Danville’s east side was operating normally Sunday (August 18, 2019) following a small fire Saturday night.  Manager Sam Patel says the fire was caused by a problem with an air-conditioning unit.  He says the damage was contained to one room.

Danville Firefighters were on the scene about two hours.  While they were there, firefighters received a rescue call for a man who fell into a ravine at the north end of Kansas Street.  When firefighters arrived they discovered the man had fallen around fifty feet down a hill and then got a leg caught between some logs.  Luckily the man still had his cell phone with him after the fall and was able to call for help.

Firefighters used ropes and a basket-type stretcher to get the man back up the hill.   He was not injured and no firefighters were hurt during the rescue.  It was 11 o’clock Saturday night when firefighters got the alarm stating the man had fallen into the ravine.  Firefighters were on the scene for an hour rescuing the victim.