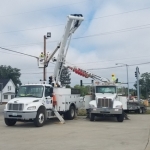 Damage assessments are continuing following the severe thunderstorms which rolled across Vermilion County and into western Indiana Sunday.  On Monday some utility workers were busy replacing some poles and downed lines still in the area.  But Ameren reported power had been restored to its customers…some who had been without service for several hours. 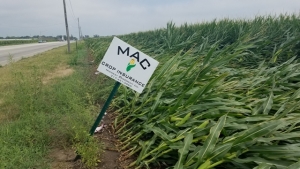 In addition to the power outages, the strong winds Sunday left damage in some area corn fields.  {The photo shows some damage to a field along Illinois route one in the Home Gardens area, south of Danville.  Ironically the sign that is shown in the photo that was also blown over advertises crop insurance. You can click on the photos to enlarge them.}

Sunday’s storm system dumped upwards of four inches of rain in the Westville area according to Doplar Radar estimates.  And wind gusts were estimated at around 60 miles per hour.  The Westville area is the same region that was hit by a hail storm in May which left millions of dollars in damages to vehicles and homes.  Construction crews are still busy replacing roofs, siding and windows in that area from the earlier storm.