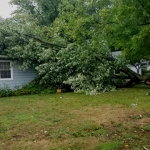 Some area residents are cleaning up following the severe storms which swept through the area around midday Tuesday (August 20, 2019).  Catlin was particularly hard hit, about five miles southwest of Danville.  Some large trees and limbs fell on homes and vehicles.  Some residents who suffered damage said the storm passed through quickly.  And some said they saw rotation in the clouds, but there was no official confirmation that the damage was caused by a tornado.  Catlin Police say there were no injuries. 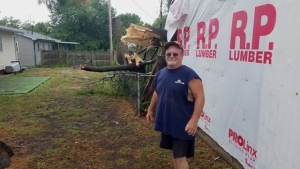 Kevin Wagle was outside his South Walnut Street home in Catlin when the storm moved in….

The tree Wagle mentioned fell into his yard from a neighbor’s yard.  Wagle also noted the storm both arrived and left quickly…

Wagle was uninjured as the forty foot tall tree fell near him.

Tawne Hedges was outside her home on Catlin’s west side as the storm arrived…. Hedges notes many residents were still trying to recover from a May hailstorm….

The May hailstorm left millions of dollars in damages across southern Vermilion County.