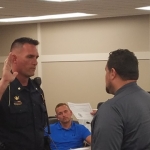 Yates had been serving as Acting Police Chief following the earlier retirement of Public Safety Director Larry Thomason.  Asked following the City Council meeting what he wants citizens to know about him, Yates told reporters….

{‘’I’m out there. Most of the public in Danville know me.  I’m very accessible. I’ve been working operations on the department for 22 years,’’ said Yates.  ‘’I’ve been on the street. I think probably the biggest challenge I have is to sit in the office whenever I have an urge to be out on the street.  I’ve got to wean myself away from there, but at the same time I want to remain available to the public,’’ said Yates.}

Former Alderman Lloyd Randle addressed the council saying he opposes Yate’s appointment.  Randle said the Council ‘’did not search long and broad enough,’’ and he challenged Yates to diversify the Department.  Chief Yates says he agrees there is a need for more minorities on the force, but added… 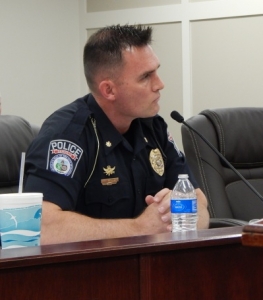 {‘’It can’t be blamed on the Police and Fire Board.  It can’t be blamed on the City Council because first we have to have applicants that are African American or minority.  We had none,’’ said Chief Yates. ‘’And it’s hard to answer that, however I do appreciate him bringing it up because if it’s his perception, maybe it’s someone else’s as well – and we need to address that.’’}

Also during their meeting the city council delayed action on a proposal to amend the liquor code regarding businesses that have video gaming.   The issue will be discussed further next month.  And the Danville City Council also approved spending nearly $275-thousand dollars to purchase a new truck to haul solid waste.