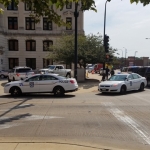 >>>THIS STORY HAS BEEN UPDATED WITH NEW INFORMATION.  SEE OTHER STORY.<<<

Vermilion County Coroner Jane McFadden has released the name of a man who suffered fatal gunshot wounds at the courthouse on Friday (August 23, 2019).  She says the person is 55-year-old Daryl L. Perkins of Hoopeston.

The Coroner says Mr. Perkin’s next of kin had requested her office not release the name until out of town family members were notified.  An autopsy was performed on Saturday, August 24th.  Illinois State Police and the Vermilion County Coroner’s Office continue to investigate the incident.

Sheriff Pat Hartshorn said Friday that the shooting occurred in an inmate holding area which is located on the first floor of the courthouse.  The sheriff said an inmate stabbed a deputy multiple times in the face, and the deputy shot the inmate.

Illinois State Police were called in to handle the investigation.