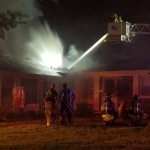 No injuries were reported late Saturday night (August 24, 2019) as fire heavily damaged a Danville home.  Firefighters say flames were already coming through the roof of the single-story home at 3235 Suncrest Drive when they arrived on the scene.

Firefighters using an aerial truck were able to dump water onto the fire from above the residence.

Firefighters were still on the scene early Sunday morning.  The cause of the blaze remains under investigation.  No one was home when the fire broke out.

The call for the blaze sounded at 10:47 p.m. — the same minute another alarm sounded for an accident involving injuries at East Main and Beard Streets.  In the accident a vehicle ended up on its side.  No other information was immediately available on that incident.

Firefighters were on the scene of the fire on Suncrest Drive until almost 2:00 a.m. 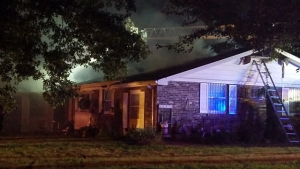 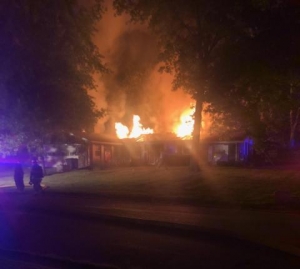 [This photo, courtesy of Danville Firefighters, shows what they faced when they first arrived on the scene.]