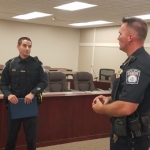 {‘’September 11th we’ll be swearing-in six more police officers. And then that will put us up to the full force.  And if things go well, training goes well as we hope, then by Easter we will be able to have our POP Unit up and fully running, as well as our other special units,’’ said Mayor Williams during an interview with VermilionCountyFirst.com News Tuesday.}  The new probationary officers are scheduled to report to their 14 weeks of training at the police academy in mid-September.

During a ceremony Tuesday morning (August 27, 2019) two officers currently on the force were promoted.  Kyle O’Brien was promoted to Commander.  He will serve as the third shift Commander for the department.  And Jason Jeffries, who has been an investigator, was promoted to Sergeant.

Mayor Williams was on hand to congratulate both men….

{‘’You know, being promoted confirms that initial investment we made when we originally swore them in,’’ said the Mayor. ‘’They’ve shown leadership. They’ve shown the skill to help our citizens and to lead their squads, and so we’re really proud of the promotions that we made today.’’}

Danville Police Chief Chris Yates says both men have done a good job.  And he added they should never forget the other officers who have supported them.  Several officers were on hand to witness the ceremony.

(**Note: You can click on the photos to enlarge them.)