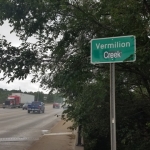 The Illinois Department of Transportation says it did not change some signs located at both ends of Memorial Bridge in Danville.  But somebody changed them, and now they have been changed back.

The signs over the weekend said ‘Vermilion Creek’ instead of ‘Vermilion River’.  But by late Monday (August 26, 2019)  the vandalism had been repaired by City of Danville Public Works employees and the signs were back to normal for motorists getting ready to pass over the bridge on Danville’s south side.

Water levels in the river dropped dramatically after two low head dams were removed.  And a recent spell with little rain has added to the view where now large sand bars are visible.

One low head dam that was removed was in the Vermilion River behind the Public Safety Building.  The other was along the North Fork River at Ellsworth Park, only a short distance from the first dam.

Proponents of removing the dams had said it would improve canoeing and other water sports.  But the dams were also removed because of safety concerns.  Over the years several people had drowned at both locations.