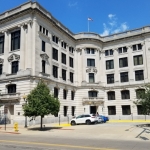 A nineteen-year-old Danville man has been sentenced to twenty years in prison after being found guilty earlier on a charge of Home Invasion-Causing Injury.   Judge Mark Goodwin sentenced Jahziel Shumpert today (August 28, 2019) to twenty years in the Illinois Department of Corrections with three years of mandatory supervised release (when he gets out of prison).

Shumpert was a juvenile at the time of the crime.  Vermilion County State’s Attorney Jacqueline Lacy requested Shumpert be prosecuted as an adult and the court agreed.  ‘’This defendant’s criminal acts robbed the victims of their ability to be safe in their own home and regardless of the age of the defendant, when permitted by law, we will request that our most violent juvenile offenders be tried and sentenced as adults,’’ said State’s Attorney Lacy.

During a four-day long trial in January, evidence was presented that on March 10, 2017 Shumpert held a gun to a 28-year-old man and forced him into his residence.  Shumpert held both the 28-year-old male and a 26-year-old female at gunpoint, according to testimony.  Both victims were battered and Shumpert also attempted to force the female to perform oral sex on him, before stealing property – including two vehicles, according to the prosecution.