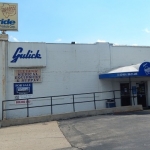 A one-year option on land owned by the City of Danville and zoned for business development has expired.  And now, Mayor Rickey Williams Jr. says the land at the northwest corner of Vermilion and Fairchild Streets is ‘’up for grabs for any developer’’.

The land includes the site where Gulick Pharmacy was previously located along the west side of Vermilion.  It stretches south to – and includes – property where an abandoned oil change building is located.

The Mayor says he has heard from a couple of developers who have folks interested in the site.  But he adds there are no guarantees that anything is coming.

[The photo shows the former Gulick Pharmacy building which was demolished earlier.  It is part of the property where the city hopes to attract new development.]