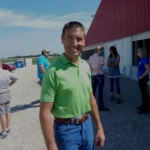 >>> THIS STORY HAS BEEN UPDATED.  SEE THE UPDATED STORY ON THIS WEBSITE. <<<

State Representative Mike Marron of Fithian is reportedly exploring the possibility of running for Congress.  Marron has scheduled a meeting with reporters this (Tuesday) morning in Danville and an aide says he plans to announce more about it then.   The Republican currently represents the 104th Illinois House District which includes parts of Vermilion and Champaign counties.

On Friday, Republican Congressman John Shimkus announced that he does not plan to seek re-election.  The decision means Republicans will have to select someone else to try to retain the seat in next year’s elections.

Representative Shimkus told VermilionCountyFirst.com News on Friday why he decided not to seek another term….

{‘’I’m just basically tired. Over the years – I’ve been serving 23 years – I’ve represented over 44 counties in the state of Illinois.  As you know my drive from Collinsville to Danville is a three hour drive, and I was just up there yesterday (Thursday), and that kind of wears on you over the years,’’ said Shimkus during an interview with VermilionCountyFirst.com News. ‘’I’m 61.  I would like to be a productive member of society for about 10 more years, and I’m going to hopefully do some other things.’’} 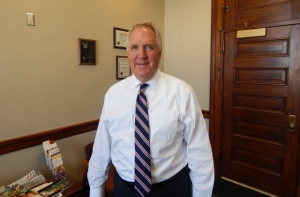 {‘’I’ve been kind of wrestling with this for three or four years. You know serving in Congress representing people from your state in the nation’s capitol, I can’t tell you what a great honor and a privilege it is.  So, gish – it’s hard to walk away from it, I mean it really is.’’}

Congressman Shimkus was speaking with VermilionCountyFirst.com News on Friday.

Marron served as Chairman of the Vermilion County Board and was a five-time representative of Illinois Farm Bureau and the Illinois Soybean Association on Capitol Hill in Washington.  Marron and his family operate a farm in the Fithian area.