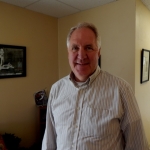 Residents living in Illinois’ 15th Congressional District will have someone else representing them in Washington after the 2020 elections.  Congressman John Shimkus announced this afternoon that he will not seek re-election.  Shimkus has served as a United States Representative since he won his first term in 1996.   From 2003 to 2013 he represented the 19th Congressional District, and now represents the 15th District.  It stretches from Hoopeston south to Metropolis, with Danville being the largest city in the district.

During an exclusive interview with VermilionCountyFirst.com News this afternoon (Friday, August 30, 2019) Shimkus explained why he decided not to run again…

Shimkus also said that he had spent considerable time considering whether to run again….

And Congressman Shimkus adds there have been several things he worked on in the U.S. House which makes him proud….

Shimkus lives in Collinsville.  He is a senior member of the House Energy and Commerce Committee and Republican Leader of the Environment and Climate Change Subcommittee.   He also serves on the Health and Communications and Technology Subcommittee.

Over the years, several of Congressman Shimkus’ initiatives have been signed into law by Presidents Bill Clinton, George W. Bush, and Barrack Obama…including:

— A 1998 law allowing for biodiesel fuel use in federal, state and private fleets;

— A 2003 law providing for the placement of heart defibrillators in schools;

— And a 2016 law modernizing the Toxic Substances Control Act, among others.