It is back to work or school Tuesday for thousands of area residents who lined parade routes for Labor Day in Danville and Westville Monday.  One of the units in the Danville parade was a float with members of the Danville Education Association.  Derrice Hightower, the DEA president, says the union remains strong….

The DEA is in the middle of a multi-year contract that does not expire until 2021.  The Association represents more than 550 Danville teachers, teaching assistants, librarians and secretaries.

Plumbers and Steamfitters Local 157 also participated in the parades.  Don Ritter of Danville, representing that group, was asked how things are going for the union….

{”We’re doing fairly well.  Of course around here the work has been a little slim, but in most other areas our people have been able to go to work all over the country because the construction industry is really starting to pick up,” said Ritter.}

Ritter says the union is looking forward to some new projects, such as Carle’s announcement that it plans to consolidate its Danville operations on a new campus west of the downtown area.

{”We have different Facebook pages and different internet sites, and, of course we’re always taking in from the military.  We have a special program called ‘Veterans in Piping’.  The military personnel get in right away, even it its not the right time that we’re having schooling.  Because we have school that lasts nine months every year for five years that they have to attend,” said Ritter.}

Plumbers and Steamfitters Local 157 covers 22 counties, including Vermilion and 5 other counties in Illinois.  The others are in Indiana. 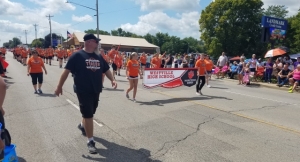 [Westville High School’s Band marches in that community’s 109th Labor Day Parade.  You can click on the photo to enlarge it.]