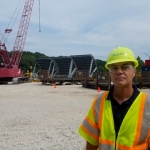 Work is advancing on a $20-million dollar project of Aqua Illinois Water Company to replace the eleven gates at the Lake Vermilion dam.   Aqua Area Manager Bob Ervin says the gates being removed were installed in 1924…nearly 100 years ago…

{”We’ve done a really good job – the company has – in maintaining the dam and the gates over the years. But after a while sandblasting, painting, patchwork with the concrete – you get to the point where you just need to replace and bring in new. So we’re excited about the opportunity to really make the investment into this structure so that many generations to come will have the benefit of safe, clean drinking water in Danville and Vermilion County,” said Ervin during an interview with VermilionCountyFirst.com News.}

Jon Hardt is the Project Manager with the company that is replacing the gates.  He notes it must have really been challenging for the workers who installed the original gates (in 1924)…..

{”Big challenges! Yow, yow big challenges.  You know, as we were talking, back in 1924 they didn’t have hydraulic machinery. They didn’t have – well they did have cranes, but not what we have nowadays.  Back then was all mules, and wheelbarrows and shovels, you know.  Everything was steam-driven back then.  So it’s big challenges – big differences,” said Hardt.}

Hardt was asked about a timetable on getting the project done….

{“Well at this phase we’re going to go until weather pushes us out, and then we’re going to come back in early spring.  So it’s really weather-dependent on what type of winter that we have here locally what drives when we start back up — and when we stop this year, too,” said Hardt.}

Hardt says the goal is to get all eleven gates replaced by the end of May of next year.