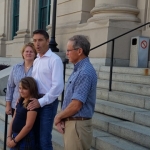 State Representative Mike Marron has announced the formation of an exploratory committee to review a possible run for the Congressional seat now held by John Shimkus.  Marron is a Republican who currently represents the 104th Illinois House District.

Marron says he was surprised Friday when Shimkus announced he would not seek another term….

{‘’And I know it’s a huge loss for the District, and for our state (and) for the nation. But I’m very interested at trying my best to fill his shoes, but of course it’s a very serious step,’’ said Marron, ‘’and so it’s something that’s not going to be taken lightly.  And I’ve got to explore the process with my family and the committee we’re putting together to see if it makes sense.  I think I owe that to the voters of both the 15th Congressional District and the 104th State Rep seat.’’}

Although he has not made up his mind yet on whether he will run – Marron is seriously considering it….

{‘’When you have the opportunity to serve in this capacity – and it’s truly an honor – you know it’s time when we need good leadership in Washington.  Maybe more-so than any other time in recent history — and I think that I can offer that.  So those are going to be things that I think long and hard about as this decision process unfolds,’’ said Marron during an interview with VermilionCountyFirst.com News.}

Marron stood in front of the Vermilion County Administration Building – where some county offices are now located – as he made today’s (Tuesday’s) announcement.  He noted the building is probably the most significant thing he accomplished since he has been in public service.  Marron was chairman of the Vermilion County Board when the county acquired the building with the help of Congressman Shimkus and relocated offices there which had been in the courthouse annex.

[Note:  You can click on the photos to enlarge them.]