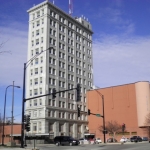 Danville Mayor Rickey Williams Jr. says he still has concerns about the future of Collins Tower even though the owners say they have a new partner.  Jeri Collins went on social media over the weekend stating that she feels the new partners will follow through.  ‘’We’ve had more get accomplished and quickly,’’ said Collins.

‘’I’ve required the Collins to provide me with engineering studies that say whatever they propose will actually provide safety for the citizens of the community, and I’m still awaiting that,’’ said Mayor Williams. ‘’I’ve received a draft version. It now has to be reviewed by our engineers internally to see if it would – in fact – meet specifications. However, I must say that they did say it was conditional upon a possible downtown casino, and since we know that is very improbable at this point – I have concerns,’’ said the Mayor to VermilionCountyFirst.com News Tuesday night (September 3, 2019).}

Traffic along West Main Street in the area of Collins tower was shifted away from the building earlier this year because of concerns about terra cotta falling from the historic structure.  The Mayor says he intends to keep the pressure on for the owners to do something about correcting the problem….

{‘’More than anything else I was elected to help keep people safe in this community, and right now that’s a safety hazard. And until they can remedy it, I’m going to stay on them because my people are my biggest priority,’’ said the Mayor.}

Mayor Williams says the city is looking into what it would cost to demolish the downtown landmark…just in case it comes to that point.  ”If that is the case, then the mayor’s doing his job, it’s o.k.,” said Collins. ”We are pressing forward with our plans,” she added.

This story by Neuhoff Media Danville News Director Bill Pickett.  Got a news tip?  Give Bill a call at (217) 709-1245 or reach him at BillPickett@Neuhoffmedia.com.