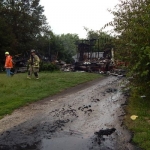 An investigation is underway into what caused a Sunday morning fire that destroyed a two-story home in Danville.  Firefighters found flames coming through the roof of the structure at 513 West Madison Street when they arrived shortly after 5:00 a.m. (on September 8, 2019). 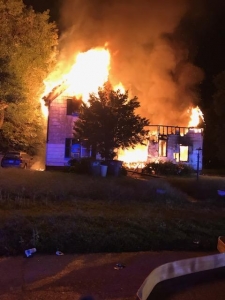 The house and a car were destroyed by the flames, leaving damages which have been estimated at forty-thousand dollars.  There were no injuries.  The home was not occupied at the time of the blaze.

Firefighters were on the scene for three-and-a-half hours.  Although the cause of the fire remains under investigation, Acting Fire Chief Don McMasters told VermilionCountyFirst.com News the blaze was not accidental.

[These photos from the Danville Fire Department show the fire had a good start before the alarm sounded.] 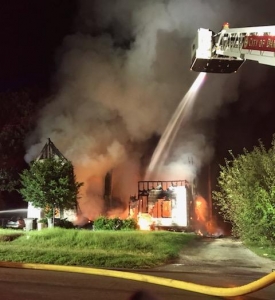