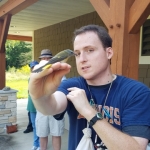 Darling says the adults are having a busy week….

{‘’They’re doing pretty much the same thing that we did in Outdoor School,’’ said Darling. ‘’They’re going on hikes. We do pond-dipping. We’re going to do the ‘critter crawl’.  We’re looking for salamanders and earthworms underneath the logs. We’re going to study the prairie, but we also have some guest speakers coming in as well.’’}

Yesterday Todd Jones, a grad student with the Natural Resources Environmental Science Department at the University of Illinois, showed the students some birds before they were released at Kennekuk County Park…. 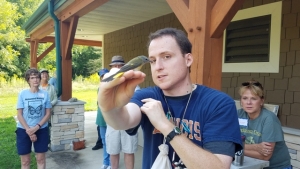 {‘’He’s also putting some scientific banding on them to help learn where their habitats are, where they nest, where they go,’’ said Darling. ‘’Some of these birds are flying to South America, all the way down to Venezuela and Brazil.  So researchers down there – if they happen to see the bird – we can correlate it to the bird being found here at Kennekuk County Park and just learn so much more about their habitat that they need and where they spend their year.’’}

This week’s class will conclude Thursday evening (September 12, 2019) with a sunset dinner in the prairie, s’mores over a campfire, and a nocturnal nature hike.