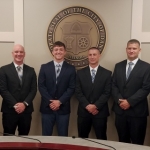 {‘’What happened on that day is thousands of men and women gave their lives trying to help others. And today is a historic day for Danville because six of you have said that you’re willing to lay down your lives for the people that you’re serving in this community,’’ said Mayor Williams. ‘’It’s a very, very noble cause, and it’s one that we take seriously here in the city of Danville – so we hope that you will, too.’’}

Danville Police Chief Christopher Yates noted that the City of Danville has now hired eight new police officers in the past few months.  He noted all of the recruits were carefully chosen….

{‘’One of the things that I ask when we’re doing the background check, I ask of the investigators doing it I said ‘investigate it to the point that you feel 100-percent comfortable that these guys are going to represent the rest of you well.’  And if you look at the back of the room you see a lot of guys – that’s your support – but it’s also your people that are going to hold you accountable.  And that’s very important,’’ added Chief Yates.}

Linda Bolton, Chairman of the Danville Board of Fire and Police Commissioners, called it a wonderful day for Danville….

{‘’It’s an honor that in this day and age when there are so many issues out there that we have six fine young men who have stepped up.  And we look forward to more being hired.  We look forward to a more diverse department which we’re certainly working on,’’ said Bolton. ‘’But we are very grateful to have people of this quality and this caliber who want to share their lives and their families with the City of Danville.  And that’s what they’re doing.’’