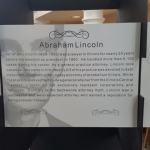 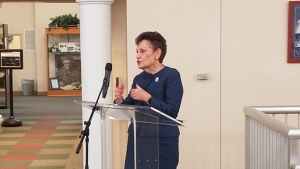 {‘’We really started the Historic Preservation Commission because of the lack of really civic education in many of our schools. Those programs have been cut over time and the statistics about what people know about the court system are pretty much abysmal.  They know more about The Three Stooges than the three branches of government,’’ said Justice Garman (shown here). ‘’And not just because I’m involved with the Judicial Branch, but it is a very important branch to the preservation of our freedoms and our democracy,’’ added Justice Garman addressing a crowd in the DACC Library.} 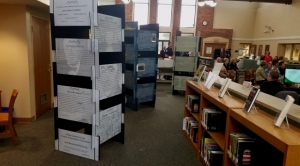 {‘’I’m pleased that in Vermilion County, for example, we have received certification for both a Drug Court and a Mental Health Court.  Our judges in Vermilion County communicate directly with the offenders, seek to understand their issues, and work towards a successful resolution in hopes of ending the revolving courthouse door.’’}