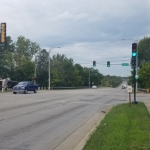 The Mayor says one thing being considered is the deactivation later of traffic signals that are now located at the intersection of Main and Logan, and also Gilbert and Harrison Streets in Danville.

Carle’s 17-acre development plan proposes closing a segment of Logan Avenue from North Street to Madison.   The development is contingent on the availability of property and zoning, in addition to the approval of a Certificate of Need.  Carle hopes to have the new development open in late 2021.

Also during the meeting Mayor Williams said plans are already being made to expand bus service when the casino opens.  It is a ways away yet, said the Mayor.  But he noted Danville Mass Transit is making plans for service between the casino and the downtown area.  And he says DMT plans to provide service to help casino employees get to the jobs there.

A decision is expected at the Danville City Council meeting on Tuesday, September 17th, on which developer will be selected for the casino.  The two which have submitted proposals both want to place it south of Interstate 74 along Lynch Road.