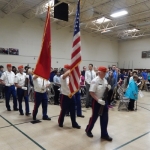 Danville’s Kenneth D. Bailey Academy is seeking nominations for its ‘Wall of Honor’.  Each year the Academy selects Veterans to be honored for not only their military service, but also their positive influence on the lives of Vermilion County residents.

Nominations are open to both men and women who have served in any branch of the U.S. Military, then continued to serve the area in civilian life.

KDBA Principal Mitzi Campbell says anyone who wishes to submit a nomination should do so by October 22nd.  Application forms may be picked up at the main office at the Kenneth D. Bailey Academy on East Main Street in Danville, or at the David L Fields Administrative Service Center for District 118 Schools, Vermilion County War Museum, Vermilion County Museum, American Legion Post 210, Danville Police Office, Danville Public Library or the Veterans Administration Hospital.