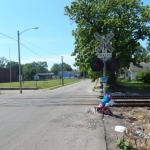 A Danville City Council committee is recommending the full council approve a contract for some safety improvements at a Griffin Street railroad crossing.  It is the crossing near Garfield Park where a 13-year-old boy was struck and killed by a train in June of 2017.

The City will use Community Development Block Grant funds to pay for the work which totals $108-thousand, 700-dollars.

The committee is also recommending the full city council approve additional funding for work that has already been completed on a roundabout intersection at Jackson and English Streets.  The City discovered that some of the work there was ineligible to be paid from an original funding source.  So the City Council is being asked to approve a resolution providing over $24-thousand dollars in additional funding for some work that included conduits, sidewalks, pavement and curbing.