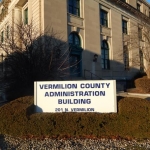 The Vermilion County Board meets tonight (Tuesday, October 8th) and is expected to vote to put its proposed new budget and tax levy on public display.  But County Board Chairman Larry Baughn notes the Finance Committee has decided it wants to take another look at the numbers…

{”You know, I think it’s just something that we owe it to the taxpayers to take a look at the budget.  There’s a deficit in there, and that number changes daily because of some different revenues that we’ve got coming in from the state now,” said Baughn. ”We’ve got a lot of reimbursements coming back. So tonight in Finance we just voted to put the budget on display, and then we’ll have a second Finance meeting this month to really go over the brass tacks of the budget that will be passed in November.”

As it now stands the proposed budget has a projected $711-thousand dollar deficit.

Vermilion County Supervisor of Assessments Mathew Long cautioned about the hikes coming in the state’s minimum wage.  He noted the mandatory minimum wage will rise to $15 an hour in five years.  ‘’We’re going to have a serious problem,’’ cautioned Long as he noted Danville’s new casino resort is expected to need up to one-thousand employees.  Long and some other office holders fear they may lose long-time employees unless the county finds a way to make wages more competitive.  And those concerns are being raised right as the county is about to begin negotiations with six unions.

Some office-holders have been able to keep some money in reserve, but Vermilion County State’s Attorney Jacqueline Lacy thinks that practice should end.  ”It’s all taxpayers money,” said Lacy.