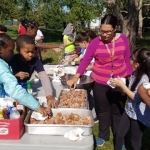 Fourth and fifth grade students at Danville’s Edison Elementary school got to take some of what they have been learning in the classroom outside today (Tuesday).  The school hosted its 31st annual ‘Taste of the Colonies’ with some colonial foods prepared over open fires. 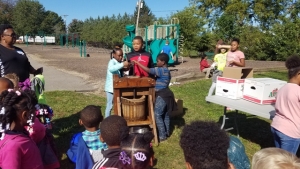 {‘’We had an apple press where they took applies and crushed them and made them into apple cider.  We made fry bread over hot oil over an open fire.  We made apple crisp using a Dutch oven and hot coals,’’ said Rogers. ‘’And they’re dipping candles because – hey – back then they didn’t have electricity and light bulbs!’’}

Staff from the Vermilion County Conservation District and some parents and grandparents of the students helped.   Although ‘Taste of the Colonies’ involved fourth and fifth-grade students…other students at the school got to watch and taste what was made.

[***Note:  You can enlarge the photos by clicking on them.] 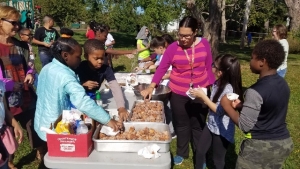