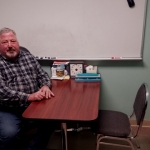 Two nights of comedy in Danville this week (November 8th and 9th) are designed to help raise funds for the Dyslexia Learning Center of East Central Illinois.

The Center…located inside the Masonic Temple in downtown Danville…is now in its eleventh year of one-on-one free tutoring for children with dyslexia.

{‘’Currently we have 16 students that are going through tutoring for dyslexia.  We have 6 tutors that are trained – who have to do 100 hours of training.  So, we’re usually a pretty busy place,’’ said Puhr.}

Puhr explained what dyslexia is….

{‘’Basically you get things backwards.  You see letters in different order than what they are.  You have trouble with addition, subtraction, multiplication, division.  You have trouble copying from one paper to another,’’ said Puhr.  ‘’It’s just an intellectual disability I guess you could say, where your brain is actually wired a little differently than normal.  So you see things differently – backwards, upside down.’’} 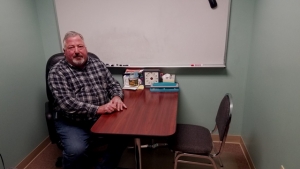 Puhr says the success rate of working with students at the Dyslexia Center is extremely high.  He says some students who had been failing at school have ended up on the honor roll.  And the free tutoring is offered by the Scottish Rite to students not only from Vermilion County, but also Champaign, Ford, and Iroquois counties.  The Center also provides free screenings to see whether a child has dyslexia.

[In the photo, Puhr is seated inside one of several small rooms at the Masonic Temple in Downtown Danville where the one-on-one tutoring is provided. You can click on the photo to enlarge it.]

The comedy shows Friday and Saturday night, November 8th and 9th at 7:00 p.m., are being held at the Knights of Columbus, at 310 Bryan Avenue in Danville.  The shows will feature stand-up comedian Jeremy Nunes with his Front Porch Comedy Show.  And special guest Larry Smith will also perform.   Tickets are $20 and can be purchased in advance of the show at the Knights of Columbus or the Masonic Temple in Danville.  Tickets can also be purchased at the door.