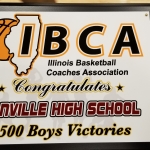 The Illinois Basketball Coaches Association (IBCA) has recognized the Danville High School Boys basketball program as one of the premier basketball teams in the state.

Steve Allen, a member of the IBCA Board of Directors was on hand to present the honor to DHS Athletic Director Mark Bacys before last night’s home game.

The honor was given to recognize the 1500 victory plateau that DHS boys basketball has surpassed over the last 100+ years.  Danville currently has 1550 wins (and counting).

The IBCA represents all of Illinois basketball at the Jr. High, High School and collegiate levels.  Each year, the IBCA honors individuals with Hall of Fame inductions and Coach of the Year selections.  In order to recognize school and team achievements, the IBCA honors basketball programs that have earned only the highest levels of success.

Past DHS coaches who were inducted into the IBCA Hall of Fame include:  Ned Whitesell (1976), Gene Gourley (1991) and Scott Olson (2013), along with sports writer Fowler Connell.

Due to this success, and because of all the great players and coaches throughout the years, Danville High School ranks as one of the premier basketball teams in the state.