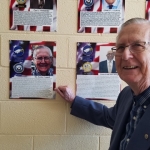 A Danville man who has devoted much of his life to sports is being honored with the Illinois High School Association Distinguished Media Service Award.  Fowler Connell is 95 years young and still going strong as a radio commentator on WDAN Radio in Danville.

After being stationed with the Navy in the Pacific during World War II, Connell started his professional career in journalism at the Champaign News Gazette in 1949.  He moved to Vermilion County in 1952 and became Sports Editor for the Danville Commercial News where he spent 37 years before retiring in 1989.  But on January 1, 1990 he got back in the game with a new job at WDAN Radio where he is still a mainstay on the station’s ‘Saturday Morning Sports Talk’ show. Connell also helps broadcast local and area sports – including his help with the NJCAA Division II Men’s National Basketball Tournament at Danville Area Community College.

‘’Seeing the development of young athletes, and then following their careers in high school and into college,’’ is what Fowler calls the best part of covering prep sports.  He also has fond memories of many of the coaches he has covered, with Paul Shebby, B. J. Luke, Gene Gourley, John Eakle and John Spezia standing out.

Among all of the amazing sports moments he has covered, Fowler was able to narrow down his top 3 favorites.  They are:

In addition to Fowler Connell being honored with the award, others selected for the same award by the Illinois High School Association this year are Neal Ormond, who has been the voice of the West Aurora Blackhawks the past 56 years, and Bob Leavitt, who spent 40 years on the prep sports beat, closing his career with the Peoria Journal Star.

‘’It’s hard to come up with adjectives to describe this group,’’ said IHSA Executive Director Craig Anderson.  ‘’Having lived and been a high school athletic director near Peoria for much of my life, I know firsthand the impact Bob Leavitt has had on high school sports in the region.  Then you look at the sheer longevity and loyalty that Fowler (Connell) and Neal (Ormond) have displayed, it really is incredible.’’ 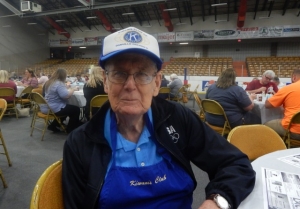 [Connell has been a member of the Danville Kiwanis Club for decades and is shown here in 2017 as he helped at the Club’s annual Pancake and Sausage Day at the Palmer Arena.]