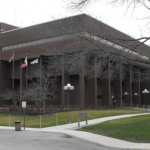 Danville Police say they are probing two shootings which occurred last night (Tuesday, December 3, 2019) and are trying to determine whether they may be related.

Police were called to a home in the 1300 block of Walnut Street around 6:40 p.m. on a report of a shooting.  They found a 31-year-old Danville man suffering from a gunshot wound to a leg.  The man told police he was inside the house when he heard several gunshots coming from outside.  One of them came through a window and struck him in the leg.

The wound was not life-threatening, according to police, who add the victim was unable to provide a description of who shot him.

The second incident occurred shortly before 9:30 p.m.   Police responded to the area of Fairchild and Harmon Streets regarding reports of shots fired in the area.  While responding they found a vehicle that had been involved in an accident in the area of Fairchild and Walnut Streets.  A 29-year-old Danville man told police he was being chased – and shot at – by occupants of a dark colored vehicle.  He said he was on Harmon Street approaching Fairchild when the unit drove up behind him at a high rate of speed.   The victim told police that is when he heard several gunshots and accelerated away from the area.  While fleeing, though, the 29-year-old’s vehicle hit another one at the intersection of Fairchild and Walnut Streets.   There were no injuries reported from the shooting, however a 67-year-old Danville man was transported to an area hospital for treatment of non-life threatening injuries sustained when the victim’s vehicle hit his vehicle.

Danville Police are still investigating to see whether these shootings are related to another that occurred in the area of the 1100 block of Harmon Street on Saturday (November 30, 2019).

Anyone who has information which might help solve these crimes is asked to call Danville Police at (217) 431-2250…or call Vermilion County Crime Stoppers at (217) 446-TIPS.