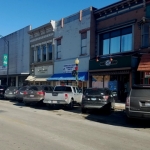 Downtown Danville is hosting some holiday activities this weekend starting with First Friday and continuing with ‘A Winter’s Gathering’ on Saturday (December 7th).

The Winter’s Gathering will include a chance for children to visit with Santa at his house at Temple Plaza between 11:00 a.m. and 2:00 p.m. Saturday.  Carriage Rides and other activities are also planned.  [And at 2:00 p.m. and again at 6:00 p.m. Saturday, The Fischer Theater will host showings of Elf. Tickets are $5 and may be purchased at the theater box office between 4:00 and 7:00 p.m. They will also be available at the box office from 11:00 a.m. until 2:00 p.m. Saturday.]

The weekend kicks-off Friday with an adult themed Winter’s Gathering downtown.  Downtown Danville, Inc. and the City of Danville are working together to create the first Jingle Bell Hop – Restaurant and Bar Crawl.

Most downtown merchants will be open during Saturday’s (December 7,, 2019) Winter’s Gathering celebration.  Several businesses will be featuring special discounts.   ‘’These community events are held to drive energy and excitement downtown, and to increase traffic for our downtown merchants,’’ said Amy McKinley, President of the Downtown Danville, INC. Board.

Santa will be at his house at Temple Plaza in Downtown Danville from 11:00 a.m. until 2:00 p.m. each Saturday (December 7, 14th, and 21st).  Kids can also leave Santa a letter in the mailbox at his house.  Santa will respond to each letter.  Templates for the letters are available at several downtown merchants, and the Downtown Danville, INC. office at 149 North Vermilion Street.