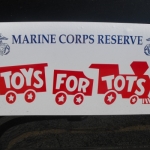 Time is running short for those who want to drop-off toys in the Toys for Tots and Santa’s Anonymous program barrels in our area.  But donations are still being accepted if you want to help.

Sherry Askren, Executive Director of the Danville Area United Way, helps the Marine Corp League and Salvation Army with Toys for Tots.  She says between 1500 and 2000 area children will be served through the program this year.   And in addition to toys collected in the barrels locally, Askren says Toys for Tots also gets supplemental shipments of toys….

[”The Supplemental Toys is what really makes a difference.  I mean they send us makeup and basketballs, and hair dryers, puzzles and games.  We got drones for the older kids and stuff, (and) remote controlled cars,” said Askren. ”And all of that’s donated.  I think I have 1200 toys just from Supplemental Toys coming in.  It’s really cool stuff.  It’s like Christmas for me to open a box and see what’s inside of it.”]

Those shipments to the local Toys for Tots effort come from group sales which handle toy sales to stores.

Askren says a number of local groups help – including employees at AutoZone and McLane Midwest Distribution Centers, along with the Vermilion Regional Airport, Wal Mart and Sons of Silence Motorcycle Club  — all of which she says deserve a special ‘Thank-you!’.  There will be a final push for donations at a drive-up event at Carle’s West Fairchild Street location on December 12th. Carle and WCIA are teaming for that event.

Some people think that if you donate money to Toys for Tots some – or all of that money – goes elsewhere.  But Askren told us….

In addition to Toys for Tots there are other programs helping children in our area over the holidays. The Santa’s Anonymous program serves children in the Westville Unit 2 School District.  The program was established in 1976 and is also run completely with a dedicated group of local volunteers.  In addition to toys, Santas Anonymous makes sure children in need have coats, hats and gloves to protect them from the winter weather.