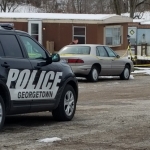 A 33-year-old Danville woman has been sentenced to twenty years in prison after she pleaded guilty today (Tuesday, December 10, 2019) to armed robbery charges.  But a number of other charges against Laura C. Johnson were dropped – including first-degree murder.

Johnson – along with Michael Long – were charged in the March 26, 2018 shooting death of Kimberly George.  George was 31 when she was shot in a mobile home east of Georgetown.  Long was 26 at the time. 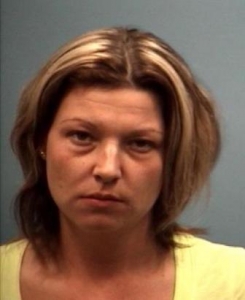 Johnson (shown here) had been charged with first-degree murder under the theory of accountability.  State’s Attorney Jacqueline Lacy says Johnson was in a car outside the residence – and was not inside – when Long allegedly committed the murder inside the home.  But Lacy says Johnson knew they were going to the home to pull a robbery.

The State’s Attorney also says Johnson provided vital information that was not known to authorities – that will aid in the prosecution of Long.   And as part of today’s plea agreement Johnson will be required to cooperate with the prosecution in Long’s trial.

Kamie Foster, a younger sister of victim Kimberly George, addressed Johnson prior to the announcement of the sentence by Circuit Judge Nancy Fahey.  ‘’I do not understand how you can take a mother from her children,’’ said Foster.

Judge Fahey said Johnson will be given credit for the 622 days that she has already been in custody in the case.