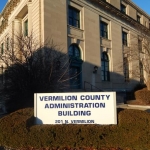 Foster served on many committees before her death, but is particularly known by many for her dedication to what was then the Vermilion Manor Nursing Home.  She was also very active in her church.

In order for a county building or portion of a building to be named in someone’s honor petitions bearing at least 500 names must be received.  The person must have devoted at least 20 years of public service to the community or performed such heroic acts in defense of others or their country – such that their name on a public building will add meaning to others in our community and be of a long-lasting significance to the community, according to the county’s policy.