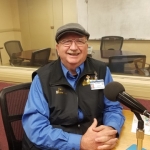 Danville’s ‘Three Kings of Peace’ – a group that mentors kids and tries to prevent violence – has a new member.  Jerry Hawker will fill the vacancy created by the death this year of Nate ‘Bobo’ Smalls.

Ed Butler, one of the founders of the group, serves along with Reverend Frank McCullough.  Butler notes they have been mentoring students at some local schools on a daily basis….

{‘’What I like about what we do is that we don’t just sit in a meeting room and say ‘we need to do this and we need to do that,’’ said Butler.  ‘’We’re out there five days a week – six-and-a-half hours a day – talking to our kids.  As a matter of fact, we’ll be starting with the upper elementary school (South View).’’}

Hawker volunteered to fill the slot to replace the late Nate ‘Bobo’ Smalls.  And Hawker says he is impressed with the reception they get at North Ridge Middle School…

{‘’Every morning one of us are there.  And many times three of us, and sometimes only two of us.  But as they come in we get them to smile.  And the other thing is the parents.  As they drop their kids off the parents are waiving at us, and that gives an interaction that somebody cares about their kids and somebody is there,’’ added Hawker.}

Not only do they greet students outside, but also spend hours inside the building helping to keep kids on track to get educated.

Since his involvement with the group, Hawker says they have received from the Cadle Foundation a $5,000 grant to help try to get a bus.  He says they want to transport kids to various locations – such as his farm or possibly ballgames.  First, though, they are working on getting their 501C-3 status to get tax-free donations.