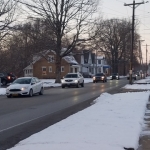 Danville City Council members have given Carle approval to close parts of some local streets and alleys for a new $70-million dollar medical campus.  Included is a three block segment of Logan Avenue that will be closed despite the objection of numerous citizens who spoke out during a public hearing at city hall last night.

The vote authorizing the vacation of streets and alleys as part of the Carle Development passed 9 to 4 with Aldermen R. J. Davis, Dan Duncheon, Aaron Troglia and Robert Williams voting ‘no’.  Alderman Thomas Stone was absent.

Alderwoman Brenda Brown thinks there will be positive spin-off from Carle’s development….

{‘’I welcome Carle to expand because there will be more specialty services. This is what I’m getting out of it,’’ said Brown.  ‘’And with these specialty services other development is going to come in this downtown area.  I’d like to see some of these empty buildings filled, and I believe that will come,’’ added Brown.}

{‘’I’m honestly for the Carle project.  I just don’t understand, before if there was no alternative to closing Logan.  But they could just take Big Lots through eminent domain if they need more room.  Or they could go north of Madison.  I mean if they were land-locked there, I would completely agree and say o.k. I guess their only alternative is to close Logan.  But there are alternatives to doing this and they’re just choosing not to do it.’’}

Dr. Jared Rogers, President of OSF HealthCare Sacred Heart Medical Center said OSF is not opposed to Carle’s plan to consolidate its operations in Danville…but is against closing part of Logan Avenue.

And Pastor Phil Jackson said other professional offices in the area could also be impacted when the small segment of Logan is closed….

{‘’It could disadvantage other doctor’s offices, Polyclinic, two pharmacies and other ancillary businesses – like Medical Equipment Supply – that also line Logan.  And there is a dialysis unit Dr. Sodhi runs in the area,’’ said Pastor Jackson.}

Nick Crompton, Executive Director of Facility Planning and Construction for Carle, explained when site preparation is expected to begin….

{‘’Our proposals are due tomorrow for our contractors for the demolition so we’re ready to mobilize by sometime in January,’’ said Crompton.}

Carle expects to have its new $70-million dollar medical campus completed in Danville in late 2021.

[Note:  The photo of the traffic above was taken shortly before last evening’s meetings in the area of Logan Avenue which will be closed.]