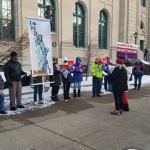 Some Vermilion County Democrats hosted an ‘Impeachment Rally’ Tuesday afternoon (December 17, 2019) in front of the Vermilion County Administration Building in Danville.  About a dozen people sang songs and chanted messages calling for the removal of President Donald Trump.

The group released a statement saying they are shocked that Representative Shimkus is not questioning President Trump’s obstruction of Congress and his withholding of Congressional funds from Ukraine in order to obtain information that would help his own election.

Congressman Shimkus announced earlier that he would not seek re-election.  Shimkus is expected to miss today’s vote because he is on vacation.  A spokesman for his office notes the vacation was scheduled this week because Congress was not expected to be in session.