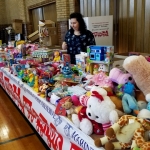 Nearly 2,000 children in Vermilion County, Illinois and Fountain County, Indiana will have a bright Christmas this year thanks to the Marine Corp League Toys for Tots program.  Today (Wednesday) was distribution day for families who picked-up toys at Danville’s St. James United Methodist Church.

Roy Huxhold of Danville is the Jr. Vice Commandant for the local Marine Corp League.  He was busy helping with the distribution….

{‘’As you can see here, we’ve got nothing but quality toys.  The people here in Danville are really giving out good anymore.  It’s really good stuff,’’ said Huxhold.  ‘’My job right now is to keep it organized so they don’t all come rushing in at one time.’’}

Sherry Askren, Executive Director of the Danville Area United Way, helps lead the Toys for Tots effort.  She told us what they were giving out to families….

{‘’They are getting three toys for each child, (and) 5 stocking stuffers.  We have Pokemon sport bottles and we have candy that was given to us by McLane.  And then we have packs of batteries, still,’’ said Askren. ‘’So every family gets those too.  And we have homemade stockings from the Lady Quilters.’’}

Askren says each year she has been involved in Toys for Tots there has been something donated that surprised her.  So has there been anything like that this year?

{‘’It was the Nestles candy bars that came in at the end of Monday, actually.  I added that up and it was 46-thousand regular-sized candy bars!  So, each family is getting a box of candy and we have some that we’re sharing,’’ added Askren.’’}

The candy was donated by McLane Company, Inc. which operates a large distribution center in Danville.

Several organizations and individuals donate their time to make it all possible.